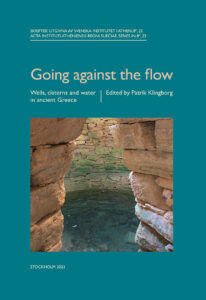 Published by the Swedish Institute at Athens. Distributed by Eddy.se AB. All content available with open access, use links below.

Going against the flow. Wells, cisterns and water in ancient Greece

Despite the prevalent picture of the water supply in the ancient world as being dominated by fountains and aqueducts, the large number of excavated wells and cisterns show that these were the primary water sources for most individuals. Yet, little research has been done on their construction, function and use. This prompted the organization of the workshop Going against the flow. Wells, cisterns and water in ancient Greece, held at the Swedish Institute at Athens on 28–29 September 2017, and subsequent publication of the contributions in this volume. The ten papers presented here offer new evidence as well as a wide range of new perspectives on the use and function of wells and cisterns in ancient Greece. Considering the ubiquity of these installations in every type of setting during antiquity, from pan-Hellenic sanctuaries and civic centres to domestic workshops and remote farmhouses, it is hoped that the breadth of interest among the authors will allow other scholars to advance their own work further, illuminating new and exciting aspects of life in ancient Greece.

Yannis Lolos, ‘Water provisioning in a marine terrace environment. The cases of Corinth and Sikyon in the north-eastern Peloponnese’, 55-75
https://doi.org/10.30549/actaath-8-23-03

Introduction. Wells, cisterns and the water supply in ancient Greece

Despite the prevalent picture of the water supply in the ancient world as being dominated by fountains and aqueducts, the large number of excavated cisterns and wells show that these were the primary water sources for most individuals. Yet, little research has been done on their construction, function and use. This prompted the organization of the workshop Going against the flow. Wells, cisterns and water in ancient Greece, held at the Swedish Institute at Athens on 28–29 September 2017, and subsequent publication of the contributions in this volume. This chapter begins by providing a background to why cisterns and wells should be studied, followed by the aims of the volume, i.e. to collect studies on Greek cisterns and wells that bring the empirical evidence into focus. Following this the chapter provides a background to the contributions by discussing the definitions of the terms “cistern” and “well”, previous research, and suggestions for future work. Finally, the chapter presents the individual contributions in the volume.

Hydro-climate in the Aegean from 700 BC to AD 300. Links between climate and freshwater availability

Fresh water is and has always been a key resource for people and will continue to be so in the future. This paper provides general insights into the hydro-climate of the Aegean Sea and surrounding areas from 700 BC to AD 300 (2650 to 1650 years before present [BP], i.e. before AD 1950). The study is based on a review of available palaeoclimate evidence from the region. Collected data was standardized to enable a direct comparison between individual records and binned into 200-year time slices. Our data shows that from 700 BC to 350 BC the climate slowly went from drier to wetter. The period of wetter climate conditions persisted until around AD 50, when the wettest climate conditions in the period 700 BC to AD 300 occur. After AD 50 our data indicate that a transition into drier climate conditions was initiated and at around AD 450 dry conditions had developed in the Aegean. Information about past hydro-climatic conditions provides an idea of the natural input of fresh water in a highly complex system of natural and social mechanisms and components that control freshwater availability. The number of potential factors controlling freshwater availability calls for interdisciplinary approaches to investigate the potential effect of climate on freshwater availability further so that as many different factors and aspects as possible can be brought together. In this paper we discuss the utility of climate proxy data for comparisons with archaeological and historical information from the perspectives of geographic location, temporal range, dating precision, resolution of measurements, sensitivity of the proxy, the kind of climate and environmental information that can be derived from it, and whether it allows a quantification of climate variability.

Water provisioning in a marine terrace environment. The cases of Corinth and Sikyon in the north-eastern Peloponnese

This paper discusses how Corinth and Sikyon, the two major cities of the north-eastern Peloponnese, managed their water resources in antiquity with particular emphasis on wells and cisterns. Corinth provides some of the best examples demonstrating the ingenuity of its inhabitants that allowed a city of this size to make do without seeking external water sources for almost a thousand years. Hundreds of wells and cisterns have been explored since the early years of the excavations of the American School of Classical Studies at Corinth, along with extensive interconnected galleries and other subterranean hydraulic systems. Although Sikyon is much less explored archaeologically than Corinth, the present evidence suggests that wells dug down to the aquifer were the primary source of water for the inhabitants of the Hellenistic and Roman city. Thanks to the intensive urban survey led by the present author between 2004 and 2009, dozens of these wells were mapped and recorded, occasionally revealing interesting details of their upper structure.

The water supply in the Late Hellenistic houses of Delos

This paper addresses the issue of water supply in the houses of Delos during the Late Hellenistic period. The small size of the island and the limited rainfall allow the formation of only seasonal streams. The only natural water resource of the island was the underground water. Consequently, the inhabitants of Delos used wells, cisterns and infiltration wells to secure the water supply. Wells are more numerous than cisterns and infiltration wells are rare. All of these installations are usually found in the courtyard of the house, but they can also be found in other locations, which generally indicates that they were kept there after a rearrangement of the house. The shape and size of these installations vary according to the nature of the ground in which they were dug, the needs of the house and the means at the disposal of its owners. The distribution of water supply installations in the houses is generally equal in the different neighbourhoods of the city, even if not all houses had their own water resource. The inhabitants of the houses of Delos seem to have used the limited natural resources of the island to secure the water that was necessary to a household.

The cisterns of the Athenian Kerameikos. Distribution and recent documentation

From 2011 to 2016, a number of ancient cisterns were studied, in part excavated and documented during the excavation of the Kerameikos in Athens. The investigations took place within the framework of an ongoing research project concerning ancient water management on the site. Important information about the topographical position and functional devices of cisterns was also taken from the systematic analysis of diaries, plans and photographs from earlier excavations (the site has been under excavation for more than 150 years). The results of this work, concerning the features, dates and use of Athenian underground cisterns are presented here in overview, while the analysis of fills and layers will be presented elsewhere in detail.

The Sanctuary of Zeus at Nemea is located within an inland valley and relied upon water for a range of activities. Water management for the sanctuary is evident through the manipulation of the Nemea River, the construction of a large, stone reservoir, and the simple aqueduct from a spring in the hills to the east of the sanctuary. The most visible intervention comprised the twelve wells constructed throughout the sanctuary. Since Nemea had two separate phases of large-scale activity, the wells, as relatively undisturbed deposits, are the best record of the activities occurring at the site. This chapter explores wells that preserve artifacts from the full range of the site’s Greek history (from the end of the 6th to the 3rd centuries BC), documenting the changes to and developments of the activities at Nemea. The scope of this study is to treat the wells as discrete units within their larger sanctuary context to examine their construction, location and use, and eventual abandonment. This approach creates a more nuanced history of the Nemean Sanctuary of Zeus.

The water supply of the Heraion of Samos

This paper presents the objectives, methods and some preliminary results of the ongoing interdisciplinary research project Water and Cult in the Heraion of Samos of the German Archaeological Institute at Athens and the Lübeck University of Applied Sciences, funded by the German Research Foundation. The focus of the text is a diachronic overview of wells and “cisterns” within the Samian Heraion. At the site 50 wells have been recorded so far. Three different types can be distinguished: shaft wells (including stair and so-called trial wells), groundwater flowing wells (“Grundwasserlauf­brunnen”) and flowing wells (“Laufbrunnen”). Round shaft wells with masonry lining are the most common type. Groundwater flowing wells, with a spatially and chronologically limited distribution, are so far only known from the Heraion. Although up to now only two flowing wells are known, it has to be assumed that there were more, since at least from Hellenistic to Roman times the water supply of the Heraion depended largely on a terracotta pipe system bringing water from farther away to the sanctuary. A closer look at the structures so far often referred to as “cisterns” reveals that they are in fact collecting tanks of wine presses.

Wells and cisterns in Greek literature

Cisterns and loutses in a traditional Peloponnesian village. Aspects of function, use and monumentality

This contribution focuses on rainwater harvesting facilities in the recent past in a traditional community on the Methana peninsula in the Peloponnese. Discussion of the basic requirements of rainwater harvesting systems, including water collection and filtration features, precedes an outline of the ethnographic situation. Some of the main elements of the system as described were dependent on industrial materials unavailable before the later 19th or 20th centuries. Possibly because of the requirements of skill, time and materials, cisterns were the first secular structures in the 19th century to be monumentalized with dates and personal initials. The subsequent discussion of the hygiene levels of rainwater harvested with traditional technologies incorporates a range of studies from around the world alongside practices used on Methana for collecting and filtering rainwater. The conclusion is that rainwater harvested in cisterns generally has higher levels of biological and other contaminants than is expected in the piped water of Western nations. Nevertheless, if the kinds of collection and filtration practices described on Methana are employed, cistern water can be considered safe to drink, and it generally contains significantly fewer microbial contaminants than water from streams, rivers and wells, which are the only water supply of many communities around the world.

Epilogue. The social side of Greek water collection

Collecting water in the ancient Greek world was an inherently social activity in public and private contexts. Using archaeological evidence of water collection, especially wells, cisterns, and fountain-houses, we can piece together numerous elements of the daily lives of the ancient Greeks. The present chapter explores the sociological nature of Greek water collection using the depictions of wells and fountain-houses on vases and the archaeological remains of fountain-houses themselves to understand better social relations in- and outside the domestic sphere, paying close attention to issues surrounding gender in the ancient Greek world. Further, contexts with wells and cisterns, such as brothels and religious sanctuaries, are also explored to shed light on new ways that scholars today can use water infrastructures in these spaces to prompt new questions about life in Greece in the past. By examining Greek water collection points more closely, we can repopulate these spaces and understand how individuals in the past used and interacted with these structures—and others around them—in addition to the impact of collecting water in the daily life of the Greeks.