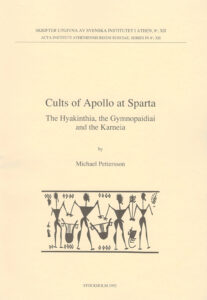 In this study, the three cults of Apollo are regarded as a rite of passage. In the first three chapters, the evidence concerning each cult is reviewed and discussed. The two-part structure of the Hyakinthia is investigated as an expression of the cult as a rite of passage. The identity of Hyakinthos is analyzed, starting with Pausanias’ description of the altar at the Amyklaion from the sixth century BC. It is argued that the bearded Hyakinthos, depicted on one relief, indicated a mature man and not the youth who was loved by Apollo, while the scene with Hyakinthos and Polyboia was associated with female initiation. Hyakinthos is presented as an ancestral figure, whose death was commemorated as part of a rite of initiation.

The Gymnopaidiai was chiefly connected with the performances of choruses. The role of choreia in Spartan culture and religion is examined. The nakedness of the participants in this cult is viewed as a symbolic expression of the liminal stage which the initiands went through.

The Karneia is regarded as the post-liminal phase of the rite of passage. Order and structure are emphasized, for example through the use of nine tents with representatives of the phylai. The enigmatic race of the staphylodromoi is interpreted as a restorative ritual, recreating the bonds between men and gods, with the pursued man impersonating a seer.

In the fourth chapter, the symbolism of the three cults as a rite of passage is further investigated. The age class system of Spartan society and its relation to the cults are dealt with.

The fifth chapter places the cults within a historical framework. The origin of the Hyakinthia is connected with the collapse of the Mycenaean palace civilization. This cult is regarded as one of the dead Hyakinthos, its function being to create group cohesion in a turbulent period.

It is suggested that the three cults came to function as a ritual cycle during the emergence of the Spartan polis towards the middle of the eighth century BC. The annually celebrated rituals established a common identity for the Spartan citizens. The Dorian character of the Spartan polis is considered as an ideological rather than ethnic identity, expressing the hegemony of the polis and its citizens over the subdued population of Lakonia.