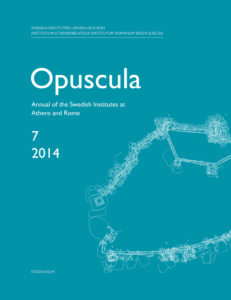 Opuscula 7 (2014) is now available for purchase and free download at Bokorder.se. Also available at Amazon.com, Amazon.de, Bokus.com and Adlibris.com.

The castration of most male animals seems to have been the rule in ancient Greece when rearing cattle, sheep, goats, and pigs; only very few adult males are needed for breeding purposes and flocks of bulls, rams, billy-goats and boars are difficult to keep, since they are too aggressive. Castrated males yield more and fattier meat, and, in the case of sheep, more wool. Still, sacred laws and sacrificial calendars stipulate the sacrifice of uncastrated victims, and vase-paintings frequently represent bulls, rams and billy-goats in ritual contexts. This paper will discuss the role of uncastrated male animals in Greek cult in the Archaic, Classical and Hellenistic periods, both from a religious and an agricultural perspective. Of particular interest are the relations between the practical, economic reality and the theological perception of sacrifice. These issues will be explored using epigraphical, literary, iconographical and zooarchaeological evidence.