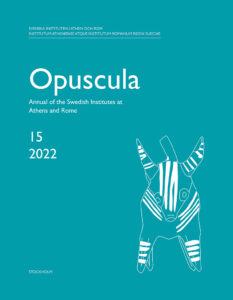 Opuscula 15 is published by the Swedish Institutes at Athens and Rome. Distributed by Eddy.se AB. View volume at ERIH PLUS.

Memorial sculpture in the Protestant Cemetery at Rome.  New discoveries and an inventory of identified works

The funerary sculpture in the Protestant Cemetery in Rome, the heart of Catholicism, has been little studied. A new inventory of monuments lists over 130 works for which the sculptor, architect or bronze foundry, either Italian or non-Italian, has been identified. Many new identifications, often based on previously unrecorded inscriptions, have brought to light the work of well-documented foreign sculptors who had settled in Rome either temporarily or permanently. Several elaborate monuments were evidently commissions from wealthy relatives or friends of the deceased, but a greater number were contributed by artistic family members or by other fellow artists. In these frequent cases, a desire to commemorate a relative or personal friend, rather than financial gain, would have been the primary motivation.