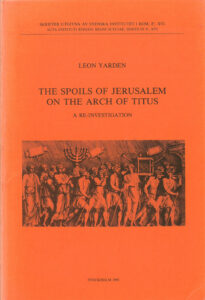 Published by the Swedish Institute of Classical Studies in Rome. Distributed by Astrom Editions.

The spoils of Jerusalem on the Arch of Titus. A re-investigation

Leon Yarden published his doctoral thesis in a revised form under the title The tree of life (London 1971). Its subject was the menorah (seven-branched lampstand) depicted on the Arch of Titus in Rome as a part of the spoils from the destruction of the Temple in Jerusalem by the Romans in A.D. 70. The present book forms the continuation and completion of this work on the relief and covers not only the menorah but also the other ritual objects depicted with it – the ceremonial table, the two receptacles on the table and the two trumpets attached to the table.

Dr. Yarden made a comprehensive study of the relief in situ in the summer of 1975, and this was supported by a photogrammetric survey made by Mr. C.-O. Jonason, of the Department of Photogrammetry at the Royal Institute of Technology in Stockholm. The purpose of this study was (1) to establish the precise appearance of the ritual objects today, (2) to gain as closely as possible a notion of their original appearance when the Arch was built, and (3) to check their original appearance against the extant literary and archaeological evidence in order to ascertain their autenticity.

I. The position of the reland

II. The delusion of single specimens

Excursus 1: The original appearance of the Arch and Israel’s coat of arms

Excursus 2: The lampstands of the Hasmonaeans

Excursus 3: The table mouldings according to reland

Excursus 4. The tables of the Hasmonaeans

VI. The receptacles on the table

Excursus 5. The trumpet coins of Bar Koka and the Sachs hypothesis

VIII. The Arch specimens and the vessels in Dura paintings