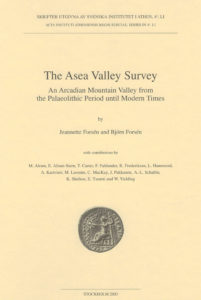 The Asea Valley Survey. An Arcadian mountain valley from the Paleolithic period until modern times

This volume presents the finds of the Asea Valley Survey (AVS) carried out 1994–1996 in a mountain valley of Arcadia with the acropolis of Asea, the Palaeokastro, as its focal point. During these three seasons of archaeological surface survey 18.7 km2 of the valley were searched intensively in foot. Artefacts spanning from the Middle Palaeolithic period to the early 19th century were systematically collected and documented. Concurrently a geological team gathered data concerning the ever-changing landscape of the valley. By combining new archaeological and geological data with ancient, Byzantine, Ottoman and Venetian written sources the diachronic history of the Asea valley was reconstructed.

Through the discovery of a Middle–Upper Palaeolithic site the regional history has been pushed back to about 50,000 BP. Furthermore, a handful of Early–Middle Neolithic lakeside sites, which produced nothing but chipped stone, may be interpreted as evidence of a gradual Neolithisation of the valley. A rather static settlement pattern, based on three villages, has been documented throughout the Neolithic period and the Bronze Age. From the Neolithic period onwards people of the valley clearly interacted with other regions of the Aegean, possibly in the form of “peer-polity interaction”.

A large amount of data pertaining to the status of Asea as a polis during antiquity, neighbouring Tegea and Pallantion o the east and Megalopolis to the west, has enabled us to interpret Asea in a larger perspective. Data concerning the process of urbanisation, the construction of road networks and the dispersion of isolated farmsteads during the Classical period, as well as of villae rusticate during the Roman period, and the general demographic trends in antiquity are also presented.

Ottoman taxation lists have supplied not only names of long forgotten villages, now archaeologically located by the AVS, but also the numbers of individuals who used to live in these villages, and the ways in which they made their living. The economy of the area witnessed a drastic change at some time during the 17th century, when people turned from a mixed agricultural economy to an economy based on large herds of ovicaprids. It is suggested that this shift may be connected to the dramatic erosion phase of the Medieval–Early Modern period, which was documented by augerings in the surroundings of Asea Paleokastro.