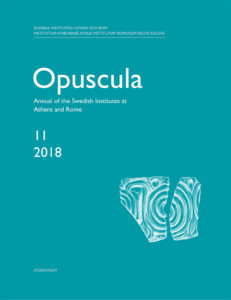 Two Early Helladic II terracotta rollers from the Third Terrace at Asine are presented. The objects, used to impress relief decoration on pithoi and hearths, are unique in that no other examples are known from the Early Bronze Age Aegean. Their origin is discussed based on chemical characterization and their depositional contexts are reviewed from an archaeological perspective. Although there are no known impressions from these rollers on pithoi and hearths at Asine, it is shown that their owners surrounded themselves with different objects featuring similar glyptic impressions. Two such impressions find identical parallels at Tiryns and the combined evidence strongly suggest that Asine was the home for one or several potters who produced Early Helladic impressed hearths and pithoi.