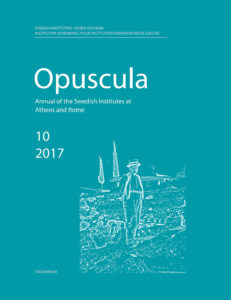 Opuscula 10 (2017) is now available for purchase at Amazon.com, Bokus.com, Adlibris.com, and Bokorder.se.

Power and coinage. The portrait tetradrachms of Eumenes II

Among other innovations in coinage, the portrait tetradrachms of Eumenes II testify to the interest that the Attalid king showed in coinage. It is difficult to date these coins using purely numismatic criteria. The generally favoured late dating is based on the notion that this was a short-lived coinage, but it may well have been struck – possibly at intervals – over a relatively long period of Eumenes II’s reign. In this paper I defend an early dating for the starting point of this coinage, in the first half of the reign and even in the first years, before the Treaty of Apamea. The historical context of the rising power of Rome in the Eastern Mediterranean after the Second Macedonian War may explain the original features of this coinage and its iconography, which shows a will to affirm a personal power and also suggests a connection with Rome through the Pergamene cult of the Kabeiroi.