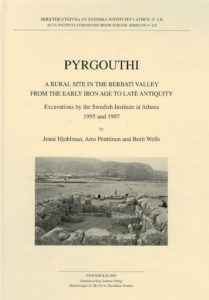 Pyrgouthi. A rural site in the Berbati Valley from the Early Iron Age to Late Antiquity. Excavations by the Swedish Institute at Athens 1995 and 1997

This volume presents the results of the excavations in 1995 and 1997 at Pyrgouthi in the Berbati Valley, Argolis, Greece. The toponym is the local denomination for a Hellenistic tower, which has always been a prominent in the landscape. In the surface survey of the valley in 1988–1990 the tower was perceived as part of a Classical farmstead and in the ensuing excavation project it was targeted as such. However, the excavations revealed that this interpretation corresponded to but a fraction of the truth.

The tower had been built on a knoll in the center of the valley but the earliest human activities at the site can be dated to the end of the Early Iron Age or the eight century BC. At this point in time, Arto Penttinen argues, the archaeological record can be reconciled with a pastoralist economy at home in mountainous border regions such as here between the Argolid and the Corinthia. In the fifth century BC, when Argos expanded its territory to encompass the fertile valley, a village grew up in its center as identified in the surface survey and west of the knoll, tile and pottery kilns were established to cater towards the needs of the congregation settling here by direct road from Argos to Corinth, the kontoporeia.

The Early Hellenistic period (c. 325–275 BC) saw the construction of a tower. It may have served both the defense of people and of produce. The tower was reused for the first time in the last century BC as part of a farmstead functioning for a couple of generations. The finds indicate contacts with Corinth as the capital of Roman Greece. Few traces of activity during this period remained in evidence as reuse of the tower in Late Antiquity had obliterated most of what was obviously once there.

At the end of the sixth and the beginning of the seventh centuries AD the site was turned into an agricultural complex, where the tower was refurbished and utilized as a press-house. Remains of two press-beds, a screw press and a bench for storage jars were found underneath the collapsed roof. The tower structure with its tiled roof of cypress and olive wood had preserved these installations intact as well as a number of amphorae and jars crushed in the collapse. Jenni Hjohlman also identifies several rooms and outdoors areas south and southwest of the tower as part of the farm complex. It was in operation at a time, when large-scale destruction following in the wake of the Slaw invasion has been suggested. Hjohlman finds the Pyrgouthi evidence hard to reconcile with such an interpretation.

The volume also contains the reports on analyses of various organic and inorganic materials retrieved during the excavation both through handpicking and through water flotation: metals and slags by Yannis Bassiakos; residue of wine from storage jars by Sven Isaksson; a charred fragment of sack cloth by Hero Granger-Taylor; animal bones by Dimitra Mylona and Petros Lymberakis; charcoal from the tower timbers by Maria Ntinou; seeds by Anaya Sarpaki; and mollusks by George Syrides.