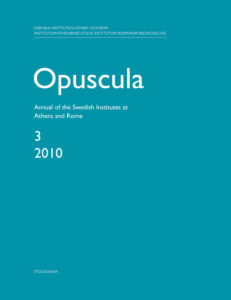 Opuscula 3 (2010) is now available for purchase and free download at Bokorder.se. Also available at Amazon.com, Amazon.de, Bokus.com, and Adlibris.com.

This is the publication of an as yet unpublished recently acquired large stepped slab dating from the orientalising period. It was delivered to the Antiquarium of Monte Romano (Vt) by the local resident who found it. The find comes from the “Ancarano” area of Tarquinia which is near the border of the Monte Romano district. The piece is of the stepped slab class, typical of seventh century BC production from Tarquinia. The slab completes a similar one which was also from Tarquinia but is conserved in the Archaeological Museum of Florence and was purchased from Mr Milani in Tarquinia at the end of the nineteenth century. Through photocomposition and integrated graphic restoration we propose a reading which links the two finds. Hence the decoration of an important funerary monument has emerged, most likely belonging to an Etruscan prince who recounts his hunting exploits, which are symbolic of elevated social status.