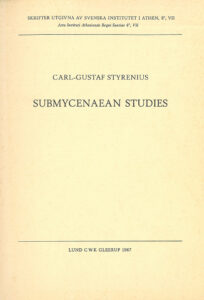 Published by the Swedish Institute at Athens. Distributed by Astrom Editions.

Submycenaean studies. Examination of finds from Mainland Greece with a chapter on Attic Protogeometric graves

The main part of the present study will be devoted to an examination of the Submycenaean and Protogeometric graves in Attica, a subject suggested to me by my Professor, Einar Gjerstad. I will try to subdivide the Submycenaean period into several phases on the basis of the development of the pottery and the location of the graves in the Kerameikos. The validity of the subdivisions will be checked by comparing grave forms, burial customs and grave offerings in the different periods.

The Protogeometric period will be examined a little more summarily and without any new division into phases. The reason for this is that most of the Protogeometric material from the Athenian Agora is still unpublished, and I will not anticipate the complete study of this subject in the Agora publication. I am most grateful to Mrs E.L. Smiths on for her kindness in allowing me to include all the unpublished Submycenaean and Protogeometric graves from the Agora in my study.

In the second part of the book I shall discuss the existence of Submycenaean pottery in other districts of the Greek Mainland in the hope of establishing a Submycenaean period outside as well as within Attica. I will compare the pottery from other parts of Mainland Greece with pottery belonging to the different Submycenaean phases in Attica and try to show that there is a stylistic correspondence. The conclusions reached are summarized in the last chapter.

B. The latest Submycenaean and the transitional graves