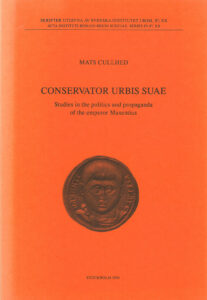 Conervator urbis suae. Studies in the politics and propaganda of the emperor Maxentius

The Roman emperor Maxentius (A.D. 306–312) has usually been seen as a usurper, who sought, but never gained recognition from the other rulers of the Tetrarchy. Maxentius’ reign has been considered a political failure. These studies are an attempt at re-evaluating Maxentius’ politics, as they can be reconstructed from his propaganda, for example, coins and architectural monuments, and from information in the literary sources, above all Lactantius. Interpreting this material within the context of the political realities of the early fourth century and with the aid of modern research on the Principate leads to the conclusion (a) that Maxentius could claim, by means of different criteria, that he was a legitimate ruler, (b) that he never wanted to enter the Tetrarchy, and (c) that he aspired to supreme power for himself. His main weapon of propaganda against his competitors was the city of Rome, where he resided. His position there was a challenge to the Tetrarchy’s decentralized power structure and served to undermine the concord of the tetrarchs.