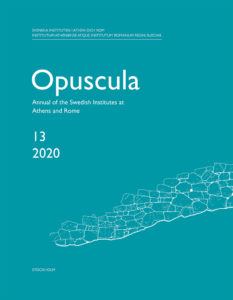 All content of Opuscula 13 is available with open access. Printed edition distributed by Eddy.se AB. Also available at Amazon.com, Adlibris, and Bokus. View volume at ERIH PLUS.

The tenth season of excavations at the Late Bronze Age city of Hala Sultan Tekke was carried out in four areas: City Quarter 1 (CQ1), CQ4, City Wall 1 (CW1), and Area A (Tomb RR). The excavations in CQ1 provided additional information on the pre-LC IIIA occupation of the city. Stratum 3 which can be dated to the LC IIC (13th century BC) was further exposed. For the first time in the city even older phases, Strata 4 and 5, were found. These are tentatively dated to the LC I–II (15th to 14th century BC). In CQ4 numerous storage areas were exposed, which belong to a large compound. There is also evidence of production of textiles and purple dye. All remains can be associated to the most recent Stratum 1 and can be securely dated in the LC IIIA, i.e. the 12th century BC. A test trench (CW1) was opened up 150 m to the south-east of CQ4, in an area where the magnetometer survey indicated a possible city wall with moat. A c. 2.5 m-wide man-made construction consisting of small stones intermingled with larger blocks of stones was found running north–south. Built against the interior of this structure is a copper-producing workshop as indicated by much slag, ash, and remains of a furnace, which is preliminarily dated to the 13th century BC. Tomb RR, which was partly excavated in 2018 and secured, was reopened and additional burials came to light. The total number of skeletons now stands at 37; these are associated with 74 complete/intact finds of mainly pottery vessels of which some contained food remains. The pottery comprises Cypriot-produced wares and Mycenaean imports, which indicate a LC IIB–C date of the burials. Other finds include a unique Minoan female figurine and a bronze knife with ivory handle.