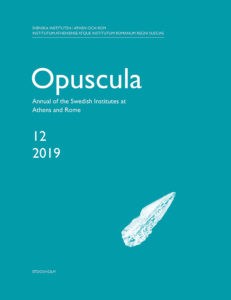 All content of Opuscula 12 (2019) is available with open access. Printed edition distributed by Eddy.se AB. Also available at Amazon.com, Adlibris, and Bokus. View volume at ERIH PLUS.

Greece and the Levant in the 10th–9th centuries BC. A view from Tel Rehov

Tel Rehov in the Beth Shean Valley, northern Israel, yielded 14 Greek (mainly Euboean and Attic) pottery sherds from the Late Protogeometric to Middle Geometric periods. This is the largest number of Greek sherds from these periods found at a single site in the Southern Levant in stratigraphic contexts. Since the Tel Rehov strata, well-dated by a large number of 14C dates, yielded some of the richest assemblages of finds from the 10–9th centuries BC in this region, the Greek sherds provide an opportunity to examine both their absolute dating in context and to discuss the nature of the relations between the two regions. Six of the 14 sherds were published previously (Coldstream & Mazar 2003); in the present paper, we describe the finds from Tel Rehov and other sites in the Southern Levant according to five chronological divisions, update previous discussions, and add new data and discussion based on a revised understanding of the site’s stratigraphy and interpretation of the radiocarbon data. To a large degree, the results confirm the chronological framework established by Nicolas Coldstream in 1968, although in a few cases some changes may be suggested which depend on interpretation of the radiometric data. As to the nature of the relations between Greece, in particular Euboea, and the Levant in this period, we refer to earlier ideas concerning these relations and emphasize new avenues of research raised by the discovery that copper from the Arabah Valley mines, which operated until the mid-9th century BC, served for producing ceremonial cauldrons in Greece. It is suggested that Tel Rehov played a role in such an international trading system, involving a route through Transjordan and the Jordan Valley.