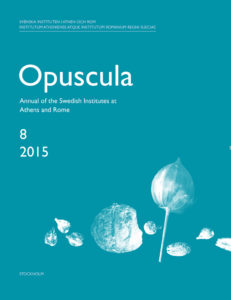 Opuscula 8 (2015) is now available for purchase and free download at Bokorder.se. Also available at Amazon.com, Bokus.com and Adlibris.com.

Rashness was one of the most urgent themes and most poignant reproaches in Greek experience and reasoning from the 5th century BC onwards: Thucydides complained of rash actions during the Peloponnesian War that led to disaster; Sophocles showed Deianeira rashly sending the lethal garment to her husband on his return with Iole, and Plato made his Socrates expose the rashness of his interlocutors’ assertions again and again. Small wonder, then that Comedy, especially the New Comedy, seized upon this all-pervading deficiency, as can be seen for example in Menander’s Perikeiromene and Epitrepontes, where impulsive young men nearly destroy their lives by acting and judging precipitately. Roman Comedy naturally followed suit, for example Terence in Heautontimorumenos as well as in his Hecyra, where he followed Apollodorus: time and again his characters assert what they do not know for certain and time and again they act according to unwarranted assumptions, a pivotal theme that hitherto seems to have been underrated.