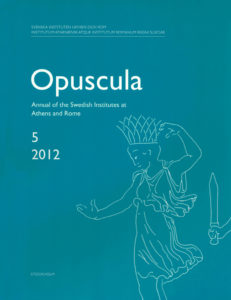 Opuscula 5 (2012) is now available for purchase and free download at Bokorder.se. Also available at Amazon.com, Amazon.de, Bokus.com, and Adlibris.com.

Six inscriptions relating to the construction of the fortifications of the southern Italian town of Telesia were analyzed and compared to three inscriptions of the same type from the Italian town of Grumentum. The purpose of this was to gain insight into how Italian towns funded and organized the construction of city-walls during the Late Republic. The city-walls were built progressively in both towns, and in both cases were probably funded by private citizens, even if they were acting as magistrates. In Grumentum an older city-wall was gradually replaced by letting each new, annually elected magistrate build a new section. It would seem that in Telesia the walls were built first. The subsequent construction of the towers probably followed the plan of the local senate and was paid for by the magistrates themselves. The expressions pro ludeis/ludis on some inscriptions suggest that they were built instead of giving games.