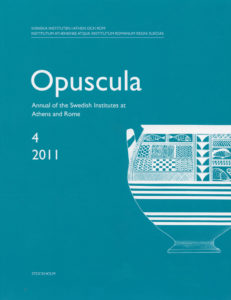 Determination of the complete occupational sequence of the site, including investigation of pre-12th century levels which were thoroughly studied by P. Åström since the 1970s, is the main task of the planned project. During the course of the expedition (NSCE11) in spring 2010 a ground-penetrating radar survey (GPR) was carried out at Dromolaxia Vizatzia/Hala Sultan Tekke in Area 6, leading to the discovery of a large Late Cypriote complex. The compound is bordered to the north by a substantial wall, against which nine rooms (so far) could be exposed. Two occupational phases have been verified but there are indications of a third. The suggested functions of the various structures of the most recent phase are: living, working, storage and administration spaces. The rich find contexts point to the production of textiles and metal objects, and the locally produced pottery is generally of a high quality. There are also many imports, mainly from the Mycenaean sphere of culture. The locally produced vessels from Phase 2 include the “Creature krater” which is a masterpiece of a high artistic standard. Another piece of elevated artistry is the piece of a “Warrior vase”.