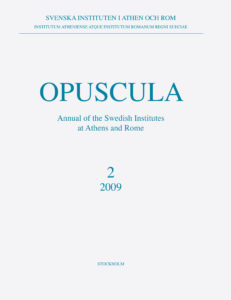 Opuscula 2 (2009) is now available for purchase and free download at Bokorder.se. Also available at Amazon.com, Amazon.de, Bokus.com and Adlibris.com.

By Arto Penttinen and Berit Wells (†). With contributions by Dimitra Mylona, Petra Pakkanen, Jari Pakkanen, Arja Karivieri, Anne Hooton and Emanuel Savini, and with an appendix by Tatiana Theodoropoulou.

Archaeological material ranging in date from the Early Bronze Age to Late Antiquity was found in 2007 and 2008 in the excavations in Area H to the south and southeast of the Temple of Poseidon. Finds datable to the periods of major change in the Sanctuary—the Late Archaic and the Early Hellenistic—illuminate the character of the change. In the Late Archaic period an attempt to erect a votive column at the site was for some reason given up, and drums of large dimensions were left visible, possibly as a reminder of the failure. The construction of a monumental drain next to the Archaic peribolos of the Temple of Poseidon in the early third century BC necessitated large-scale leveling work in the area coinciding in time with the dedication of a Ptolemaic, royal statue. These types of events have a tendency to dominate in the archaeological record at the cost of periods of normalcy. Those periods are represented in the form of pottery, other artifacts and animal remains, which constitute evidence for activities that obviously did not change much over time, such as dedicating objects to the deities present in the Sanctuary and animal sacrifice with ensuing preparation and consumption of food. In this report we attempt to present the archaeological remains in accordance with the type of deposits they originate from. Also included is an appendix on the marine mollusks by Tatiana Theodoropoulou.