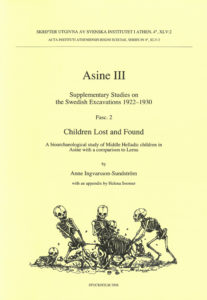 Asine 3. Supplementary studies in the Swedish excavations 1922–1930. Fasc. 2. Children lost and found. A bioarchaeological study of Middle Helladic children in Asine with a comparison to Lerna

This study focuses on children’s living conditions during the Middle Helladic period in Greece. The primary material comprises disarticulated skeletal remains found in a stratigraphic context during the Swedish excavations of Asine in 1926: 4,583 fragments/complete bones. These made up 103 subadults and 36 adults by means of Minimum Number of Individual (MNI) calculations. It was possible to assign subadult skeletal remains to 39 of the 105 already published graves in the Lower Town of Asine. In addition, children’s graves and skeletal remains from the neighbouring site of Lerna (periods IV–VI) are considered for comparisons of demography, health and mortuary treatment. The wider archaeological context, i.e., the published mortuary material from the settlements and cemeteries, is also examined and used to describe the community’s perception of children.

It is necessary to consider children in past cultures as active and constantly changing individuals, possessing different social roles during the course of their life. Given that a culture’s perception and definition of children are dependent on age or physical development, for example, the physical remains of these individuals must be given adequate attention; only by including these data also can one hypothesise on a culture’s image of a child as well as on their age specific morbidity and mortality. I argue that neonatals, and even fetuses were regarded as individuals who were afforded the same type of mortuary treatment as older children and adults in the intramural cemetery of Asine. However, it is likely that the elite groups of the community had other customs, possibly preventing the burial of fetuses and neonatals in the extramural cemetery used by them.

The examination of children’s growth and analysis of the teeth suggest that their morbidity was aggravated by periods of malnutrition at both sites. The presence of prenatal disturbances on the teeth combined with normal length of the long bones during the infants’ first months points in different directions: it is therefore likely that different types of physiological stress affected different parts of the skeleton during the individuals’ development. The skeletal growth profiles of children indicate that growth started to be affected after three months of age, and after two years of age many children could probably be considered short for their age in comparison with modern Western children. The neonatal mortality at both Asine and Lerna was probably increased by women’s poor health which seems to have begun already in childhood.

Significant amounts of foods other than breast-milk were probably given to the infants at around four months of age, as reflected by the Bourgeois-Pichat biometric analysis. Demographic variables derived from contemporary pre-industrial populations suggest that older siblings were likely to have been important care-givers for infants and young children, a practice which would also be consistent with an early introduction of other nutrients than breast milk.