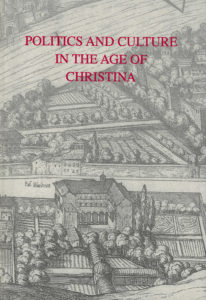 Politics and culture in the age of Christina. Acta from a Conference held at the Wenner-Gren Center in Stockholm, May 4–6 , 1995

Christina of Sweden (1626–1689) has been the object of both scholarly and popular interest in the three centuries that have passed since her death. This attention is related to the breadth of her influence on 17-th century European civilization. Thus, politics and culture in the age of Christina was the subject of a conference held in Stockholm in May 1995 and sponsored by the Wenner-Gren Center Foundation. The first section of the volume treats the relationship of politics and the arts in the age of absolutism as well as Christina’s political environment in Sweden and, from 1655, in Italy. Christina’s unfinished Autobiography is reexamined on the basis of previously unstudied manuscript variants and her religious profile is discussed. A second section treats Christina’s relationship to the arts. Christina’s role in Roman ceremonies and processions is examined.

Theodore K. Rabb | Politics and the arts in the age of Christina

Jan Glete | Absolutism or dynamic leadership? The rise of large armed forces and the problem of political interest aggregation from a mid-17th-century perspective

Marie-Louise Rodén | After the Westphalian Peace: the political transformation of the 17th-century papacy