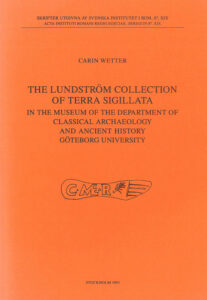 The Lundström collection of terra sigillata in the Museum of the Department of Classical Archaeology and Ancient History, Göteborg University

This study is and investigation of the collection of stamped terra sigillata sherds which is stored at the Museum of the Department of Classical Archaeology and Ancient History at Göteborg University. The sherds were bought in 1909 by Vilhelm Lundström, the professor of Latin at the newly founded Göteborgs Högskola (1891), when visiting Rome with his students.

It is argued that there are reasons to assume that the sherds were not only bough in Rome but that they were also found there, as was, for example, the well-known Riese Collection, bought there at the same time, and furthermore that this was due to the extensive excavations alongside the River Tiber when the embankments were built.

The aim of the investigation is to interpret the stamps, to identify the workshops and, if possible, to establish the shape of the vessel of which the sherd was once a part. For this purpose, the description of the stamp has been complemented with photographs and meticulous drawings. To facilitate the difficult task of establishing the shape of a vessel of which only the base is left, exact drawings of the sherds have also been made.

The study gives a short account of previous research and a definition of the term “terra sigillata”. It deals with the production of the pottery and what is known about the trade. A short discussion is given on the importance of the natural sciences for terra sigillata research.

A catalogue is made of the 152 sherds in the collection, together with a description of the stamp of each item and with the conclusion drawn about its shape, base and date. The Conspectus formarum terrae sigillatae italico modo confectae, published 1990 by an international team of scholars, has been used for the classification. The form numbers used in the Catalogue refer to this publication.