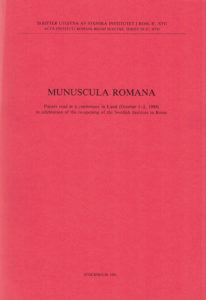 Munuscula Romana. Papers read at a conference in Lund (October 1–2, 1988) in celebration of the re-opening of the Swedish Institute in Rome

In October 1988, the Swedish Institute in Rome was reopened after a period of renovation. From the point of view of Classical scholarship in Sweden, this reopening was an event that called for celebration: thus a symposium was held in Lund, on the initiative of the Department of Classical studies at the University, in collaboration with the South Swedish chapter of the Society of Friends of the Institute (October 1–2, 1988).

The aim of the symposium was to give an idea of the current range of Swedish scholarship within the Italic and Roman spheres. This research is carried out in numerous disciplines—history (political, social, economic), epigraphy, numismatics, religion, art, etc.—and within broad chronological frames (from prehistory to Late Antiquity).

Of the papers read at the symposium, most are presented here, in revised versions. Regrettably, four lectures which contributed to the wide range of subjects, do not appear:
P.G. Gierow, ‘The Aeneas legend’,
B. Malcus, ‘Towns and landowners in Asia Minor during the Empire’,
T. Tinz, ‘The Hypogaeum of the Aurelii’,
M. Cullhed, ‘Maxentius as princeps’ (published in OpRom 17, 1989, 9–19).

On the other hand, two papers not read at the symposium are included in the present volume: those of Å. Fridh and I.M.B. Wiman, A.-K. Ekholm and K.G. Malmqvist.

Our thanks are given to Dr Carole Gillis, who edited the English, and Ms. Ann-Christin Hansson, who helped considerably with the typing.

A s a token of esteem we dedicate the present volume to the Institute, the valuable base for our studies—past, present and future.