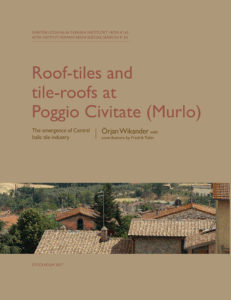 By Örjan Wikander, with contributions by Fredrik Tobin

This book has various aims: presenting and discussing the roof-tiles discovered at Poggio Civitate, trying to reconstruct the many roofs they once covered, and outlining the general development of roof-tiles and tiled roofs in Central Italy during the period from c. 650 to 200 BC. Moreover, it also brings the authors earlier studies of skylight-tiles and Archaic simas up to date.

Five chapters present typological features of separate tile categories (Ch. I), distribution of terracottas (including the decorative ones) on various roofs (Ch. II), technical issues concerning the production of tiles, their placement on roofs and the collapse of these roofs (Ch. III), plastic and painted decoration (Ch. IV), and the conclusions that can be drawn concerning the chronology of the Poggio Civitate roofs together with a sketch of the introduction and early diffusion of tiled roofs in Central Italy (Ch. V). In one of the appendices letters and signs found on more than three hundred Poggio Civitate tiles are presented and discussed in detail.