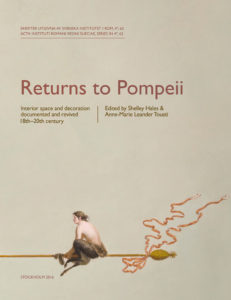 This volume presents a series of case studies that trace the ways in which audiences across Europe have attempted to return to Pompeii by emulating its interior decorations since the city’s rediscovery in the mid-eighteenth century. As such, it is about both the impact of Pompeian antiquity on the present and the reception in the present of that antique past, exploring the variety of ways in which Pompeian domestic space and decoration have been revived (and for what purposes and audiences).

The contributions to the volumes compare the ways in which Pompeian wall decorations were interpreted and adapted, given new context and put to serve new social and political purposes, both close to their place of discovery, in the Kingdom of Naples, and in the far-off European periphery, represented by Denmark and Sweden. The many images presented to the reader in this volume confirm colour, fantasy and playfulness, alongside an almost academic orthodoxy of structure, as trademarks of a defined neo-Pompeian style. The volume brings together scholars from different disciplines; archaeologists, arthistorians, pigment technicians and decorators, all of whom have participated in this collective effort to achieve new understanding and appreciation of past and present manifestations of the Pompeian idiom.

Ulla Houkjær | Recollections of a better place. The transformation of Pompeian ideals in Danish interior decoration, 1790-1860

Anne-Marie Leander Touati | Pompeii in Stockholm: A focus on content

Anne-Marie Leander Touati & Ulf Cederlöf | Observations on the museums in Portici and the Vesuvian sites made by two Swedish professionals in 1756 and 1768, respectively

Bettina Bergmann | A tale of two sites: Ludwig I’s Pompejanum and the House of the Dioscuri in Pompeii