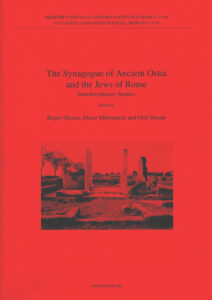 The Synagogue of Ancient Ostia and the Jews of Rome. Interdisciplinary Studies

In March of 1997 a research project on the ancient synagogue began at Lund University, Sweden, continuing a tradition of research that has its roots in the 1930s. The project’s title “The Ancient Synagogue: Birthplace of Two World Religions” suggests that Judaism and Christianity existed for a time in close proximity to each other and were shaped by the same particular milieu within the ancient world, namely, the synagogue. The synagogue in ancient Ostia was chosen as an initial case study, since there is evidence that it was built during the first century CE and consequently is one of the earlier synagogues in the Roman world to have been excavated.

Olof Brandt presents for the first time a more extensive description of the area outside the city walls where the synagogue was built. Anders Runesson surveys all the material that has been published about Ostia in order to make a new reconstruction of the synagogue’s history in Ostia. Magnus Zetterholm attempts, primarily with the aid of interpretative theories and general considerations, to sketch the relations in Ostia between Jews and Christians. His study poses important questions about how to use sociological models in order to better understand the ancient synagogue. In a second contribution, Anders Runesson discusses ritual washings in Ostia and in other synagogues in the diaspora. Karin Hedner-Zetterholm presents a more general picture of Jewish congregations in Rome, and Sten Hidal analyzes what Roman authors of this period had to say about Jews, all in order to attain a better understanding of the life and activity in this particular synagogue.

The language environment at Ostia is elucidated in two studies, one by George Walser, dealing with the Jewish use of Greek in ancient Rome, the other by Per Å. Bengtsson who gives a detailed presentation of the surprisingly few Semitic inscriptions from Rome. Irene von Görtz-Wrisberg discusses what can be known about the synagogue worship service during this period in history and based on that knowledge reconstructs a Sabbath service in Ostia. All the articles in the present volume set forth new understandings about the synagogue in Ostia and offer insights into the many methodological difficulties that lie in wait for every scholar who researches the ancient synagogue.

Olof W. Brandt | The quarter surrounding the synagogue at Ostia

Anders Runesson | The synagogue at ancient Ostia: the building and its history from the first to the fifth century

Magnus Zetterholm | A struggle among brothers: an interpretation of the relations between Jews and Christians in Ostia

Anders Runesson | Water and worship: ostia and the ritual bath in the diaspora synagogue

Sten Hidal | The Jews as the Roman authors saw them

Georg Walser | The Greek of the Jews in ancient Rome

Irene von Görtz-Wrisberg | A Sabbath service in Ostia: what do we know about the ancient synagogal service?