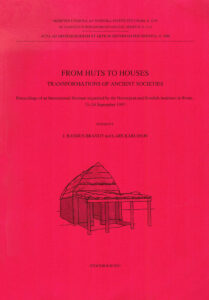 From huts to houses. Transformations of ancient societies. Proceedings of an international seminar organized by the Norwegian and Swedish Institutes in Rome, 21–24 September 1997

The present volume contains 43 of the 43 announced papers and 11 posters presented at an international conference in Rome in 1997. In a cross-cultural context, the papers examine various aspects of transformation processes connected with architectural changes, covering themes such as building types and development, building function, building technology, and finance and organization. Within this framework, the investigations span a long era, extending from the Mesolithic period to modern times, including experimental reconstructions of ancient dwellings. From the geographical and cultural point of view the contributions cover the Middle East and Europe from the Arabian deserts to the Arctic Ocean, though with a slight emphasis on central Italy in the Iron Age. The last article is a translation from Swedish to English of a study on shepherd huts in the Roman campagna made by S. Erixon in 1932, an article often quoted in studies on primitive architecture, but not easily accessible to all.