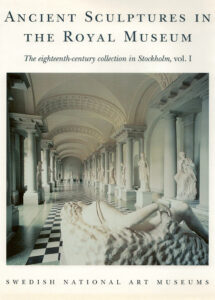 Ancient sculptures in the Royal Museum. The eighteenth-century collection in Stockholm, vol. 1

By Anne-Marie Leander Touati, with contributions by Magnus Olausson

This is a presentation of the ancient sculptures acquired in the 17th and 18th centuries by Swedish royalty and subsequently arranged into a public museum in 1794. The work is based both on the testimony of written sources and on the examination of the pieces. The documents related to Gustav III’s acquisitions (c. 200 pieces) in Rome between 1784 and 1789 are particularly rich. They yield ample information both on the Roman antiquities market and on the Enlightened, antiquarian tradition in Sweden. The changing attitudes towards the collection from the late 18th century up to the present date are touched upon. The terminology used to describe Roman sculpture is discussed and the 18th-century techniques are surveyed. Finally a catalogue which includes discussion of the 15 main pieces of the collection follows.

Part 1. Background
1. The history of collecting
2. The main sources for the collection
3. The collector: Gustav III and his entourage (by Magnus Olausson)
4. The middlemen: Antiquarians, art agents, dealers, and restorers
5. The museum
6. The sculptures: quality, Roman character, and 18th century condition