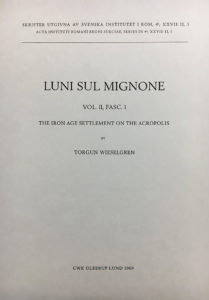 Luni sul Mignone 2:1. The Iron Age settlement on the Acropolis

Luni sul Mignone, the small hill which will be remembered for its important remains from the Bronze Age and for the Monumental Iron Age building, has also brought to light less important remains from the latter period, which will be dealt with in the present report. It was during the third Luni campaign, led by Dr Carl Erik Östenberg on behalf of the Swedish Institute in Rome, that I was asked to undertake an excavation on the NE side of the Luni plateau. In the hope of finding remains of habitation we started where there still seemed to be enough earth to produce a stratification, since higher up where the earth-layer was only 20-15 cm deep, no traces had been found. A trial trench revealed that the place had been inhabited during the Iron Age. In the following excavation, which lasted a month, remains of three huts from this epoch came to light.