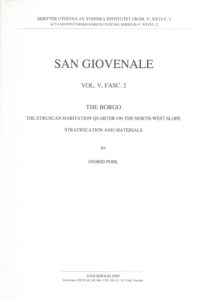 San Giovenale. The Borgo. The Etruscan habitation quarter on the North-West slope. Stratification and materials

During 1961–1963 and 1965, excavations were carried out on the so-called Borgo as part of the large-scale archaeological investigations of San Giovenale which took place in 1956–1965. A large habitation complex consisting of houses, courtyards, lanes and wells was uncovered. The architectural remains and their stratigraphy will be presented in Part I of the publication. In this part (Part 2) the stratigraphy and the material found in the excavations are presented.