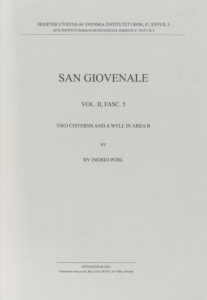 Distributed by Eddy.se AB. Also available at Bokus.com, and Adlibris.com.

San Giovenale. Two cisterns and a well in Area B

Area B on the San Giovenale plateau was inhabited during the Bronze Age, the Iron Age, the Archaic period, the Hellenistic period and Medieval times. Trial trench AP 2 in Area B was excavated by B.E. Thomasson in 1958–1959 and by B. Olinder in 1960 and 1961, uncovering two underground cisterns dated to the Archaic period (CI and CII) and a fourth- to third-century well (W). In this volume, the cisterns and the well are published together with the pottery and other finds found within them. A presentation of the structures is followed by a catalogue including pottery and minor finds of terracotta, metal, glass and stone, as well as tiles. The pottery assemblage includes Greek imported wares, Italic or local painted and glazed ware, unpainted fine wares (Bucchero, Fine Cream ware), as well as household wares, kitchen wares, large jars, dolia and pithoi. The finds are illustrated by figures and plates. A general discussion presents an overview of the pottery according to wares followed by a discussion on the minor finds and the structures themselves. The finds from the cisterns and the well testify to a habitation in the area during the sixth to third centuries BC.