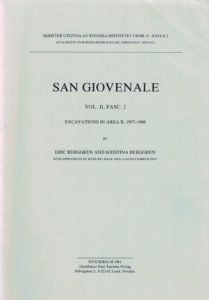 San Giovenale. Results of excavations conducted by the Swedish Institute of Classical Studies at Rome and the Soprintendenza alle Antichità dell’Etruria Meridionale vol. 2. Excavations and finds. The Acropolis (part 1) fasc. 2. Excavations in Area B, 1957–1960

The excavations published in this volume were carried out during four successive campaigns in the autumn of the years 1957–1960, each campaign lasting c. one month. The author directed the excavations of 1957 and 1958, while detailed examinations of the area in the following years were directed respectively by Dr B.E. Thomasson and Dr B. Olinder, the trench masters, who kindly entrusted us with the publication of their results.

Area B is situated on the Acropolis of S. Giovenale between the western façade of the medieval castle and the moat further west, which runs transversely N–S, at a distance of c. 50 m from the castle.

During the last week of the 1957 season, an exploratory trench was opened with the purpose of finding a starting-point for the work of the next campaign (Tr. AP 57:1). One of the two test-pits opened (C) revealed two walls almost at right angles, built of tufa squares of Etruscan size, thus giving us the starting-point for further investigations. In the 1958 season, the diggings were chiefly devoted to this area, which was explored by means of three trenches (AP 58:1–3) and a series of test-pits within and between these trenches (AP tp A–J).

A small trail trench was dug by the author, laid out in the NNW–SSE direction, following the tufa wall, the top of which cropped out just east of the moat. This wall was built of small tufa blocks and ran at right angles to another wall, similar, but more irregularly built. It bordered the eastern edge of the moat.

A test-pit was sunk in the northern end of the moat for closer examination.

Two test-pits were dug at the centre of the southern, outer façade and across the apse of the Chapel of S. Giovenale.

During the 1959 and 1960 campaigns, test-pits C and E were re-opened and enlarged (test-pits L, M, N and O). These explorations resulted in the uncovering of a rectangular house built of big tufa blocks.