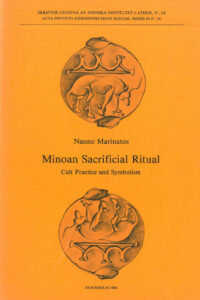 Published by the Swedish Institute at Athens. Distributed by Astrom Editions.

The cult practice and symbolism of Minoan sacrifice ritual are examined in this monograph. The archaeological evidence is analyzed and suggestions are made concerning the type and place of sacrifice, location of cult meals and species of sacrificial animals. The iconographical evidence supplies additional information about the priesthood, manner of sacrifice and occasions during which animals were slaughtered. Several scenes from glyptic art are discussed where sacrificial ritual is presented as a pictorial metaphor. Certain symbols are isolated and their connection with sacrificial practice is established. Through a projective mechanism, the Minoans expressed not only the importance of animal sacrifice but their perception of it as an extension of the laws of nature.

Part 2. Symbols on seals denoting sacrifice of animals
Introduction
The eight-shield
The sacred garment
The impaled triangle
Types of scenes in which the three signs occur
Determinatives and sacrificial ritual