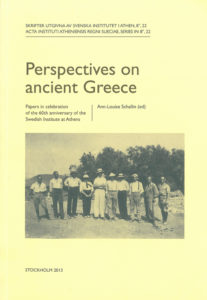 Now available for purchase at Amazon.com, Amazon.de, and Bokorder.se

Perspectives on ancient Greece. Papers in celebration of the 60th anniversary of the Swedish Institute at Athens

Mats Johnson | The “Best Match Principle”. Humans making the most of every environment

Lena Sjögren | The enduring Minoan legacy. Coming to terms with Minoan culture after the Bronze Age

Gullög Nordquist | Each in its right place. The placing of the votives at the early temples at Tegea

Susanne Berndt-Ersöz | Kybebe on fire! The significance of the Goddess in the Ionian Revolt

Lars Karlsson | The sanctuary of the Weather God of Heaven at Karian Labraunda. A Bronze Age cult exposé for Robin Hägg

Adam Lindhagen | The freedmen milieus at Delos and Narona. New perspectives on the Lamboglia 2 wine trade