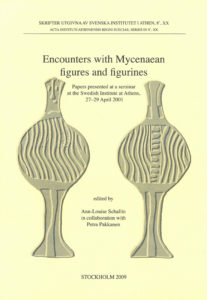 Encounters with Mycenaean figures and figurines. Papers presented at a seminar at the Swedish Institute at Athens, 27–29 April 2001

This volume presents fourteen articles which discuss Mycenaean figurines from various points of view. They focus on different aspects of the figurines, elaborating on their function, contextual characteristics, production, use-life, classification, topography, and history of scholarship. The articles are based on papers given at a workshop at the Swedish Institute at Athens in April 2001 entitled ‘Cultic Space and Mycenaean Figurines’. The idea of having a workshop arose from the fact that several of the participants were involved at the time with the documentation of various figurine types from the so-called Potter’s Workshop at Mastos in the Berbati Valley in the Argolid. The number and variety of the Mycenaean figurines from Mastos is impressive, particularly as the excavation had covered only a small area. The excavator, Å. Åkerström, proposed that the site had a cultic function in addition to its role as a production centre. In order to better understand the characteristics and identity of Mastos, scholars were invited to discuss the problems of the function and contextual characteristics of Mycenaean figurines more generally, presenting figurines from different sites so as to provide comparative contexts. Figurines in primary context are naturally considered as especially important since they may further our understanding of the roles of the figurines in religious as well as secular contexts. Issues such as interpreting the social roles of the figurines and considering their relation to other votive offerings, although not necessarily tied to primary contexts, are also discussed in this volume.

Elizabeth French | Figurines revisited and the importance of Phylakopi

Petra Pakkanen | Figurines as agents in Mycenaean religious ritual. An approach from the perspective of religious studies

Ioulia Tzonou-Herbst | Trashing the sacred: the use-life of Mycenaean figurines