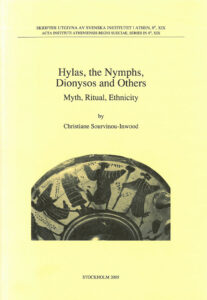 Hylas, the Nymphs, Dionysos and others. Myth, ritual, ethnicity. Martin P. Nilsson Lecture on Greek Religion, delivered 1997 at the Swedish Institute at Athens

The focus of this book is the reconstruction of the mythicoritual nexus of Hylas in Kios in Mysia through the in-depth investigation of the evidence (surviving in accounts by, and so shaped by the filters of, outsiders) and also of other issues implicated in its Problematik: ethnicity, cultural and religious interactions between Greeks and non Greeks, colonial discourses (with special emphasis on the foundation mythopoea of Kios’ mother city, Miletos), the nature and function of the Nymphs, the different personalities of Dionysos, advent festivals, certain problematic categories of cult recipients.

Hylas’ myth and ritual had been constructed, I conclude, through complex interactions between several Greek mythicoritual schemata and included also elements that appear in non Greek nexuses located in the area of Kios. The myth was both a foundation myth constructing cultural continuity with the heroic age and an immortalization myth: a Greek youth was abducted by Nymphs and became a deity rooted in the landscape, symbolically rooting the colony to the land; it established a poiouchos figure unique to Kios, connected Herakles with the city’s foundation, and articulated a relationship of cooperation and integration between Greeks and non Greeks. A ritual celebrated Hylas’ advent and commemorated the events that had led to Kios’ foundation, articulating a cooperative relationship between Greeks and locals.

The reconstruction of Hylas’ construction as a deity illustrates the plasticity of Greek religion, how material is taken over, transformed and deployed in different nexuses, with (transformations of) clusters of mythicoritual elements moving between heroes, minor immortals, and major deities, and crystalizing in different divine personalities.