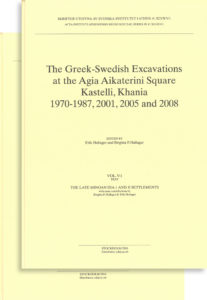 During the years of excavation the LM II and LM IIIA:1 period was always considered a unit, called Level 5. The following detailed studies of stratigraphy and pottery, however, made it clear that the two chronological phases at the GSE also represented two different stratigraphic units. After the LM IB destruction at the site a few rooms of the destroyed houses were cleaned of the destruction debris and repaired to offer very modest living conditions. While the part of the settlement excavated by the GSE can only be described as a squatter habitation during LM II and LM IIIA:1 there can be little doubt that an important part of the settlement existed nearby. This can be deduced from two observations at the GSE. One observation is the fact that the old streets were cleaned of destruction debris and maintained throughout the period showing that communication within the town was still needed. The second observation is the finds from the many pits of the periods. The locally produced pottery is of a very high quality especially in LM IIIA:1, and imports from Knossos, Palaikastro, Kythera, the mainland and the Levant also bear witness to the importance of the site. While rooms with floor deposits are virtually non-existent, pits and dumps dominated the material from the two periods. In the LM IIIA:1 period as much as 86% of the pottery came from such deposits. The detailed study of the pottery supplemented by minor observations concerning building technique showed that the LM II period to a large extent was a continuation of the LM I period, while LM IIIA:1 became much more innovative.

The volume includes seven analytical chapters where groups of material is presented diachronically throughout the entire excavation. This has been possible since the basic stratigraphical analyses for the forthcoming vols. VI and VII have been completed. The material thus analysed are the pithoi, the seal devices, the sealings and sealed documents, the invertebrates, the wild cattle, the archaeobotanical remains and the microfauna.