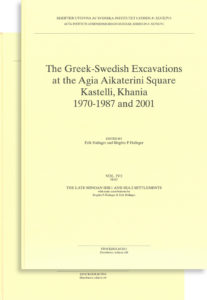 The Greek-Swedish excavations at the Agia Aikaterini Square, Kastelli, Khania 1970–1987 and 2001. The Late Minoan IIIB:1 and IIIA:2 settlements

This volume is the fourth in a series of seven presenting the results of the Greek-Swedish Excavations during the years 1970–1987 and 2001 in the Agia Aikaterini Square, Kastelli Khania. The excavations which are situated close to the harbour of the modern town of Khania, western Crete were under the direction of Dr Yannis Tzedakis and Professor Carl-Gustaf Styrenius.

During the years of excavation the LM IIIA:2 and LM IIIB:1 period was always considered a unit, called “Level 4”. The following detailed studies of stratigraphy, pottery and architecture, however, made it clear that the two chronological phases at the GSE also represented two different stratigraphic units. By the end of the reoccupation phase in LM II and LM IIIA:1, one large important building, Building 2, was constructed in the LM IIIA:2 period. This building, of which only a small amount was unearthed within the Agia Aikaterini Square, continued in use until the end of the LM IIIB:1 period, where finds of Linear B tablets and a complete inscribed stirrup jar, the inscription of which included the abbreviation for wa-na-ka-te-ro, royal, were revealed.

At some time in the LM IIIA:2 period a new building was constructed to the southwest of Building 2 partly reusing walls of the ruined LM I settlement. This building was demolished during the earliest phase of LM IIIB:1 when a substantial new building was constructed. This building (Building 1) covered an area of more than 154 m2 and contained at least 10 rooms and spaces, some of which contained good, undisturbed floor deposits. In both the LM IIIA:2 and LM IIIB:1 settlements large rubbish pits in the southeastern part of the excavated area were noted. The area north of the buildings was probably an open space partly used for waste in LM IIIA:2, while there are faint indications that it might have been occupied by a building (“Building 4”) in the LM IIIB:1 period. All excavated units within the LM IIIB:1 and LM IIIA:2 settlements are dealt with in some detail, according to their stratigraphic positions, after which follows the analyses of the architecture, the pottery and the different kinds of small finds. The volume ends with an appendix on statistics.

The analyses show that in the LM IIIA:2 and especially the LM IIIB:1 period Khania was an important commercial centre in the Aegean with lively contacts all over the island and to the surrounding Aegean and wider Mediterranean world. This is partly shown by the distribution of the pottery from the Kydonian Workshop, and the production and distribution of transport stirrup jars several of which were inscribed with Linear B. The importance of the settlement as an administrative centre in the Aegean is clearly demonstrated by the finds of Linear B tablets.