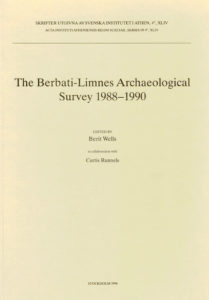 This volume presents the results of the surface survey carried out in the Berbati Valley and on the Limnes plateau for three seasons between 1988 and 1990. Both in ancient and modern times the two areas differ considerably both economically and politically, which in part is due to the natural environment, Prosímni (Berbati) lying in a fertile valley and Limnes in a mountainous district. The introductory chapter gives a general background to the project, introducing the two villages involved, presenting the objectives and setting out the methods employed in the field.

For much of its history the Berbati-Limnes area depended upon external economic systems and powers. Thus the Final Neolithic–Early Helladic pastoral economy can be explained as part of the developments in the Balkans called the Secondary Products Revolution. These changes resulted in the catastrophic soil erosions which more or less depopulated the area at the end of the EH. The recovery was slow. Only towards the end of Middle Helladic does there seem to be a new beginning, which heralds intensive use of the area in the Late Bronze Age. In the early Iron Age there are late and few traces of activity until Mycenae resettles the valley in the mid-eight century. This is paralleled by the Argive recolonization in the Classical period, when a land division took place which is supported also in our literary sources. Towards the end of the third century of our era a villa rustica grew up in the valley and soon came to dominate it. The Limnes area lay more or less abandoned at that time.

We argue for terracing in our survey area as early as the Mycenaean period. However, large-scale terracing on high limestone hills seems to be a recent phenomenon, probably dating to the fourteenth century and indicating a strong tie with the western European polities following the Fourth Crusade. Although herding and the cultivation of olives, grain and tobacco still dominate the area, fruit orchards with oranges and apricots are now spreading over the Berbati Valley.